I am a creature of habit.

That’s really nothing more than a (euphemistic) shorthand for “I’m an extremely boring and pathetic individual” but I like to think it makes me seem just that little bit less boring and pathetic. (Who needs five stages of ANYTHING when you’ve got denial? Denial — one-stop shopping for all your self-delusion needs.)

Pathetic or not, boring or not, certain things do trigger certain responses. Don’t have last rock in the first end?  Throw a tight inturn guard. Writing a story and the plot bogs down? Add ninjas. It’s Saturday morning and you’re hungry? Go to the Insomniac Capriform Cafe and order bacon and eggs.

That’s a problem. (One that, surprisingly, denial doesn’t help with.) Not because I’ve ceased being boring and pathetic (I wish), not because I decided I don’t like eggs (not gonna happen) but because we just passed the one year anniversary of the closing of the Insomniac Capriform Cafe. After more than two decades, it’s gone. 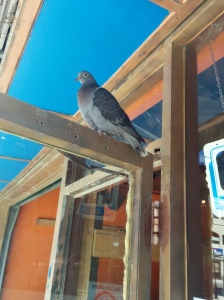 His disapproving gaze kept me from
ripping the door off its hinges.
(Again.)

A year without altercations with a poorly socialized doorman. A year without exploding simiiformes. Twelve months without close encounters with frightening (possibly incomplete) art. Fifty Saturday breakfasts that haven’t been at the Insomniac Capriform Cafe. (That’s not to say they haven’t happened, but we’ve been looking for the Perfect Spot and haven’t yet found it. So there’s no Routine.)

There’s one place with pretty good eggs, darned good home fries and generally friendly staff. Unfortunately it’s frequently too busy to get a table, the coffee is mediocre at best and the art is both unchanging and completely generic. There’s another that has a guy who habitually shows up to watch soccer and root for whoever is playing against Arsenal. And while that does score major quirkiness points, the menu (while excellent) is geared more toward lunch than breakfast. There’s another place with a pretty good menu but it’s kinda busy, kinda chichi and happens to be owned by a giant lizard who looks like Godzilla (but for copyright reasons isn’t). And so on. For fifty-odd weeks.

On a recent-ish Saturday we (Ms. Rose and I) were walking downtown, heading toward yet another completely adequate yet somehow faintly dissatisfying breakfast when we passed by a family — Mom, Dad and their five(ish) year old son. The young gentleman was having an exceptionally, um, vociferous Moment on the sidewalk. As we passed them he shouted (with as much hatred as a five year old can muster, which is quite a lot)

Hmm. Apparently I’m not the only one struggling with the concept of breakfast. Maybe I’m not as pathetic as I thought.