(If this is a little rough, blame Michelle.)

I am not an authority figure in a hat.

I don’t much like authority figures and I don’t particularly care for hats either. Despite this, I acknowledge that occasionally the stars and planets align in such a way that ‘they’ can say something that contains a grain of truth.

In particular, one (faux) authority figure said something like

“I may not know much about art, but I know what I like.”

(He didn’t say it first, of course. He’s paraphrasing two authors at the very least — Henry James and Max Beerbohm. Clever fellow, that pope. Must be the hat.)

Whoever said it, though, and despite the fact that the Pythons used it for comic effect, I think it can be a reasonable-ish sort of statement.

The operative words are, of course, ‘can be.’

How does this apply to me? Well, I don‘t know much about art. (Or anything else, various people would hasten to add. Thanks, various people.) Heck, I’m not even sure I know what art is. Back when I was in grad school, a friend wrote a five hundred page thesis on the definition of art. I never read it, of course, so it only stands to reason that I don’t know what art is. Mostly I fall back on the near-tautological ‘definition’ that “art is someone expressing something.”  (I’m cranky and opinionated though, so I put arbitrary limits on that. I acknowledge that those limits aren’t necessarily consistent. I am large, I contain…) 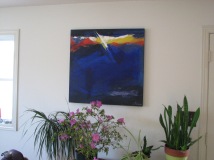 Bought in a bathroom.

Not bought in a bathroom.

As for ‘knowing what I like’, well, I like to think that I’m self-aware. I like lots of things. (I also dislike lots of things. Whatever.) If I limit myself to visual-things-that-could-be-called-art-because-they’re-someone-expressing-soimething that I can see from my Green Chair of I’m-not-napping-I’m-just-resting-my-eyes, I can see two paintings (both abstracts), one etching (of a bridge seventy-five kilometres up the road), two photographs (a fence that needs painting more than ours did before we had it knocked down and some oak leaves that I will never need to rake) and a pen-and-ink depiction of fourteen (?) sisters (??) being crushed by giant snakes. (A friend calls it nightmare-inducing but I like it. Which is, of course, the whole point.) I’m always on the lookout for things I like that I can afford (that last bit is important).

Let’s change the subject for a moment. To summer.

Summer is finally here. After a seemingly endless winter and a spring that teased for longer than was strictly necessary, it’s now summer. Summer means a lot of things: it means walking back and forth over and over again until it gets hot enough for everything to turn brown. It means patios with young ladies. And it means other people’s junk.

I’ve mentioned that on the local market square one can sometimes find a skating rink. One can also find (duh) a market: food, crafts, art, that sort of thing. (There’s that word again, but this art is, apparently, seasonal. I don’t know what that means.) In the summer, though (technically spring and fall as well, but it’s rather bigger in the summer) there’s an antiques market there.

I don’t ‘get’ antiques. You probably could have predicted that.

I mean I get beautiful items of timeless design made by gifted craftsmen (I have a few myself) but not all ‘antiques’ seem to fit that description. That’s the part I don’t get.

Whatever. We were walking around the antiques and peoplewatching (a curler, a guitar player and a person who thinks this blog is a little too highbrow despite the fact that the third most common thing I write about is urination) when we saw it.

The seller had the drawing proudly displayed atop a bedpan.